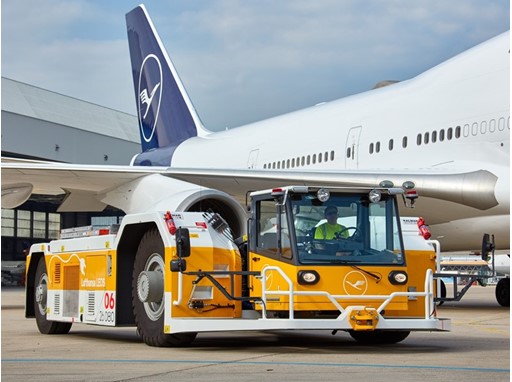 Lufthansa LEOS, the ground handling services expert at Germany's major airports, has been using the world's first eTug at Frankfurt Airport since 2016. The subsidiary of Lufthansa Technik has now put a second one into operation. During its construction, some improvement potentials were taken into account, which the company made on the basis of the operational experience with the first eTug - both with regard to the technical design of the vehicle and the ergonomics for the driver.

The 700 kW electric vehicle developed by the Swedish company Kalmar Motor AB arrived at Lufthansa LEOS in Frankfurt in the spring of this year. After the necessary upgrade work, such as the installation of radio and transponders, it is now in use at Frankfurt Airport. The eTug ensures environmentally friendly maintenance and positioning towing as well as pushbacks of large passenger aircraft. It brings aircraft such as the Airbus A380 or the Boeing 747 purely electrically to their parking positions, to the hangar, to the gate or on the way using pushback and can move aircraft up to a maximum take-off weight of 600 tons. That's 15 times his own weight.

By using the eTug, up to 75 percent of emissions can be saved compared to a conventional, diesel-powered aircraft tractor. The noise level of the eTug is also significantly lower.

The electric vehicle has all-wheel drive and all-wheel steering, so that despite its length of 9.70 metres and width of 4.50 metres, it is easy to manoeuvre even in the partially limited space of the maintenance hangars. The lithium-ion batteries have a capacity of 180 kilowatt hours. This corresponds approximately to five to six times the capacity of a commercially available electric car. If necessary, the batteries can also be recharged during operation with the aid of an integrated diesel engine, the range extender. The diesel unit thus fulfils a safeguarding task, so that the upcoming missions can be carried out in any case.
The eTug is a project within the E-PORT AN initiative at Frankfurt Airport. Its aim is to successively convert individual vehicle types on the apron to electro-mobile drive technologies. In addition to the Lufthansa Group, partners in the initiative include Fraport AG, the State of Hesse and the Rhine-Main electromobility model region. The Federal Ministry of Transport and Digital Infrastructure is supporting the partners' investments of several million euros in these forward-looking electromobility projects. The initiative is scientifically supported by the Technical University of Darmstadt and the Technical University of Berlin. In 2014 E-PORT AN received the renowned GreenTec Award in the category “Aviation", in 2016 the Air Transport World Award as “Eco-Partnership of the Year”. Already in 2013, the German government awarded E-PORT AN as a beacon project.