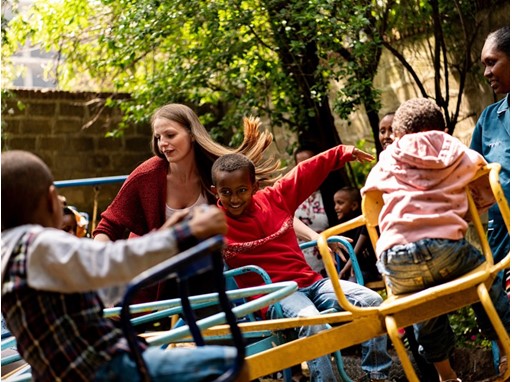 Travelling can change a life: The inspiring power of places away from the reality of life is the focus of the Lufthansa campaign #LifeChangingPlaces. Today in Germany the third wave of the campaign starts in cinemas, on television and online. The campaign launched for the first time in 2017.

The new spot focuses on a moving encounter in Ethiopia. As part of a flight mission to the country in north-eastern Africa, Lufthansa flight attendant Maira discovers the incredible diversity of the country and the friendliness of the people. In Addis Ababa she visits the Mother & Child Rehabilitation Centre, which supports mothers and children who have been victims of violence. The visit changes everything for Maira. Thanks also to her, the centre is now a project of the help alliance, an aid organisation of the Lufthansa Group that once founded Lufthansa employees.

"A fascinating place, a moving story. With our #LifeChangingPlaces digital first campaign, we are once again proving how worthwhile it is to go around the world openly. This is exciting content on more channels than ever before," says Benita Struve, Head of Marketing Communication & Campaigns.

The campaign is played out cross-media. It accompanies the target groups via numerous channels with inspiring and activating content in line with Lufthansa's claim "Say yes to the world". The spots are shown on TV, in cinemas and on the Internet. The campaign also has a wide reach in print ads and posters. At the same time, the campaign takes place on all relevant social media channels. In a podcast, the renowned journalist Shelby Stanger talks to Lufthansa flight attendant Maira about her trip to Ethiopia and how the experiences changed her life. The podcast can be listened to on Spotify, Apple Podcasts, Soundcloud, Deezer, Google Podcasts and Amazon Alexa.

Interactive installations complement the campaign and collect donations for the help alliance. In Terminal 1 at Frankfurt Airport and in Terminal 2 at Munich Airport, passengers can donate to projects of the Lufthansa relief organization by sending emojis. Another interactive experience is offered by the "Help Desk" - an augmented reality installation that, among other things, makes important school materials visible from nowhere on a table. Users can discover them with their smartphones and also donate directly.

The integrated digital campaign was developed in close cooperation with the Lufthansa lead agency Kolle Rebbe, DDB & Tribal Hamburg, Mindshare, Elbkind Reply and Territory. The responsible film production is 27km, directed by Vincent Urban. The Lufthansa magazines in print and digital were produced by Territory. Mindshare is responsible for the integrated media planning.

More information and inspiring stories about #LifeChangingPlaces can be found at lufthansa.com/places

Further information on the help alliance, the aid organization of the Lufthansa Group and its employees, can be found at https://www.helpalliance.org