Working while others go on vacation: Christmas and New Year’s Eve above the clouds 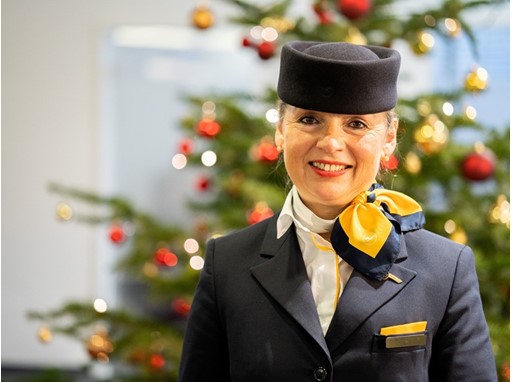 Achim Bergmann will be celebrating Christmas with his family this year – just like any other year. His wife’s birthday is on 23 December, both kids are studying in different cities. They’re coming home for the holidays, to Mainz. But when Bergmann and his three loved ones exchange gifts and well-wishes, they won’t be in the city by the Rhine – they’ll be in Boston, Massachusetts. Because that is where the Airbus A340 captain will be heading to on 23 December – on duty. Bergmann has been with Lufthansa for 28 years now and has been flying Airbus A330 and A340 aircraft for 10 years. He says that he has lost count of how many times he’s been on duty during the holidays, but adds “I’ve always taken my family along”.

While Lufthansa flight attendant Elke Martha Körting-Mahran has frequently flown during the Christmas holidays, this is the first time she’ll be working on New Year’s Eve. While Christmas is the time of year when she can really spend time with her kids, the exact date doesn’t matter that much to her: “My three children are adults,” the 58-year-old purser says, “if something comes up, we’ll just celebrate Christmas later”. And last year, Körting-Mahran had two “family dinners”: one on the 24th, at home in Bonn with her children, and one on the 25th, in New York City’s Black Forest restaurant with the crew. Organized by their captain, paid for by Lufthansa. Körting-Mahran flies “mixed” – short-haul and long-haul routes. No matter where the flight is headed or how long it takes, the purser aims to give her guests above the clouds the sense that they are at home on board. “Home away from home” – that motto is even more important to her on the holidays.

→ Interview for editorial use: New Year’s Eve in a Russian snowstorm – Lufthansa captain Sigurd Behrens has often flown at New Year’s. One New Year’s Eve, they rang in the new year in a snowstorm over Russia

A reduced schedule during the holidays

Just under 1000 pilots will be taking off for Lufthansa from the Frankfurt and Munich hubs on Christmas Eve and Christmas Day. And on these two days, over 4500 cabin crew members will be on duty in the air, with over 1000 more on the ground, on standby and reserve duty. Less than on “normal days”. Because while December 21 and 22 are pre-holiday high-traffic days with roughly 67,000 passengers departing from Frankfurt alone, most people prefer to spend Christmas Eve under the tree instead of in an airplane. Which is why the flight schedule is pared down, especially on routes with a high proportion of business travelers. This affects flights to Bangalore and Boston, but also to European destinations like London. On 24 December, Lufthansa Group “parks” a total of 44 long-haul and around 90 short-haul aircraft at Frankfurt airport.

Employees on duty in many areas of Lufthansa Group

Reduced flight schedule or not – things don’t come to a complete standstill for the silent night at Lufthansa or the other airlines and business areas. Aircraft maintenance at Lufthansa Technik, for instance, operates on normal shifts around the clock 365 days a year and it’s “business as usual” in almost all operational areas at Eurowings – in the air and on the ground. Lufthansa Systems also provides its IT support for business-critical applications on holidays and at LSG Sky Chefs approximately 400 employees at the Frankfurt location will work to provide food for our guests on 24 and 31 December. On days with regular shifts, there are just over twice as many. There will be many other examples like this throughout Lufthansa Group over the next few days.

And incidentally, Lufthansa restarts the regular flight schedule just in time for the new year: between 1 and 6 a.m. almost all the aircraft tugs will be in use on the airport apron in Frankfurt, performing their carefully choreographed “tug ballet” with festive lights. On New Year’s Eve flight attendant Elke Martha Körting-Mahran will be on her way to Algeria at midnight. “And who gets to experience New Year’s Eve above the clouds?”