Welcome on board! In more ways than one. 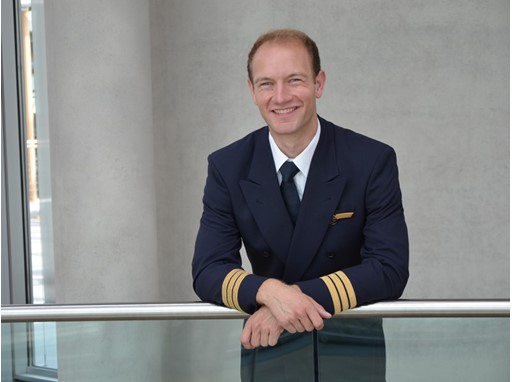 Benjamin Fischer has been a co-pilot at Lufthansa CityLine for just over two weeks. At the same time he has taken over the leadership of the help alliance street children project in Pattaya, Thailand. A story about wishes that come true.

Benjamin Fischer wanted to be a pilot at Lufthansa for half his life. After completing his line training two weeks ago, he took his place as co-pilot on the right hand side of the CityLine cockpit. At the same time, the Lufthansa employee was also signed up by help alliance. As project manager he is responsible for the project in Pattaya, Thailand, which is dedicated to protecting street children. He himself describes being able to combine these two things close to his heart as "fantastic".

But let’s start at the beginning. “I still remember the exact day when I was 15 years old and first read online about the possibility of training as a pilot with Lufthansa”, says Fischer. From that day on it was clear “where I was headed”. The dream of flying came true for this Hilden-born pilot and participant of the 409th training course for young pilots - even if it was to take another twelve years.

In the meantime, he made his way to Thailand. After completing his Abitur in 2010, the last year before compulsory military service was abolished, Fischer had to do alternative civilian service. “At the time, the Federal Ministry of Economic Cooperation and Development had set up the so-called “Weltwärts” programme, which allowed people to do their civilian service abroad. “When I was at school I spent six months at a high school in the United States, so I definitely wanted to do that”, says the co-pilot. “I thought it would help me develop as a person”.

This wish also came true, and for one year Fischer assisted with the help alliance project in Pattaya, Thailand. Just as with the Lufthansa group’s aid organisation, Fischer was there almost from the beginning - the Human Help Network Foundation (HHN) in Thailand, the project’s sponsor, had only been founded two years earlier. “That was also when I first came into contact with help alliance”, he says. “I knew that I would one day apply for pilot training at Lufthansa, and so I was very curious and bombarded the staff who visited the project with questions. I remember thinking that it was great that Lufthansa gave people the opportunity to become involved in social projects”.

The project itself was still in its infancy at the time and I also had a different focus. It was more about exposing and persecuting crimes related to paedophilia and child prosecution – “extremely dangerous work". The volunteers were of course not involved in this. “Instead, we had the chance to work with the children in the shelter”, which was nothing like today's facility. “There were only three temporary houses built on muddy ground, and a couple of bamboo sheds with plastic chairs that were used as classrooms. Today, there is proper housing, well-equipped classrooms, a dining hall with kitchen and their own cook, a sports ground and an enormous farming area where the children can grow their own vegetables.” There is now even a fish pond, a pig and chicken farm and a place to grow mushrooms. The number of children in their care has multiplied.

Today, the focus is on prevention. “The street workers do educational work in the slums, they talk to the children and parents and try to explain to them the dangers and risks of exploitation.” These are still very high, “because many children are alone during the day, since their parents have to earn a living as day labourers”.

But despite the rudimentary structures in 2010, the project, the children and the culture left a lasting impression on him. “These experiences shape me to this day. I made many friends. Pattaya and the project have become a second home to me”. Since then, he has been visiting the children every year, and is proud of how far the project has progressed thanks to help alliance. “Many of the children are now going through puberty or are even older and well on their way to leaving their sad past behind them”, says Fischer. “They really have great prospects now”.

For Fischer, things have come full circle. “I have wanted to get involved in help alliance since I started at Lufthansa”. And now the perfect opportunity has presented itself. Ewald Dietrich, the founder of the project, and the new help alliance managing director Andrea Pernkopf and project manager Mona Adler got together in Mainz to talk about the project. “help alliance has been looking for a project manager from Lufthansa for some time. During the meeting, Ewald called me to ask whether I was free to pop by and see them. I happened to be at home in Mainz, and so I did”, Fischer laughs. “The chemistry was right immediately. Mona Adler told me about the volunteer tasks of a project manager, and I immediately accepted the offer to become the project manager. Since every visit and all the project management work would be done in my free time, there were no overlaps with my pilot work. Everything was right. I am really looking forward to this work and the possibility to get to know help alliance from the other side. For me the jigsaw puzzle is now complete”.