The new, old “Aunt Ju” will be ready for take-off again very soon 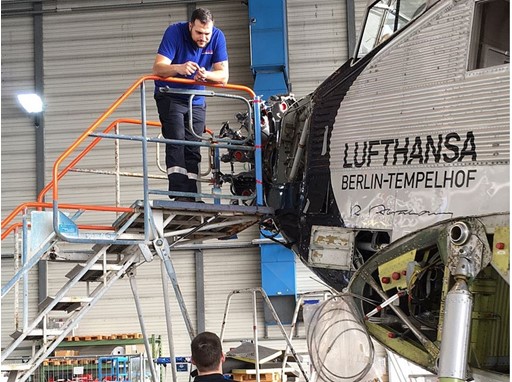 The Ju 52 of Deutsche Lufthansa Berlin Stiftung (DLBS) will be heading into the new flight season in early May, fitter than ever. The comprehensive overhaul of the vintage airplane, built in 1936, at Lufthansa Technik in Hamburg is now “on the home stretch”.

Just in time for the 81st birthday of the D-AQUI on 6 April – the date on which this airplane, assembled at the Junkers plant in Dessau, was delivered to the erstwhile Lufthansa exactly 81 years ago. An official rollout in Hamburg is planned for this day, and will be attended by the political who’s-who of the Free and Hanseatic City. After all, in late summer 2015, it was Hamburg’s department of culture that awarded the title of “movable monument” to “Aunt Ju”, the world’s first commercial passenger aircraft to receive this honour.

And soon afterwards the Ju 52 team got quite a shock: due to a fracture in a central stringer, the flight season had to be cut short for safety reasons. And during the extensive repair work, fatigue was also detected in other structural elements – in particular the lower spars of the wings. With heavy hearts, the DLBS Board of Directors and the team of specialists working with Technical Director Matthias Panten decided to cancel the 2016 anniversary flight season entirely and invest in a one-time comprehensive overhaul instead of dealing with necessary repairs one by one. Hundreds of individual parts had to be manufactured and fitted to the millimetre during the repairs – according to written reference material from the 1940s. Among other things, “Aunt Ju” was fitted with entirely new planking for the underside of the wing, using roughly 70 lengths of aluminium and 22,000 rivets. By the time the Ju 52 is “completely healed” and ready to fly to Holland for paint work, the comprehensive overhaul will have taken up far more than 20,000 hours of work, and the overhaul of the wings alone will have cost over a million euros, instead of the originally projected 900,000 to 400,000 – although some of those funds have been provided by public funding for the preservation of historical monuments. But then again, those terribly long one and a half years in the Hamburg repair facility have been a real fountain of youth for the “grande dame of the skies” and Matthias Panten is confident: “She now has the potential to make it to her 100th birthday!”

Just how much the many Ju fans have been longing for the “old auntie” to take to the air again is reflected in the ticket sales at DLBS: 75 percent of the round-trip and ferry flights of the Ju 52 scheduled throughout Germany from May to October are already booked solid.