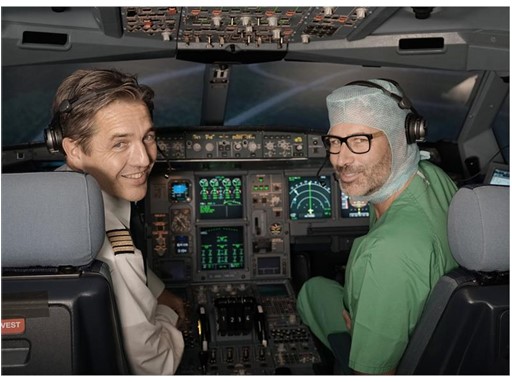 In the airline sector, Human Factors training is a matter of course. Now, Lufthansa Aviation Training is also providing help in hospitals in order to reduce human error

Every third death in a hospital can be traced back to human error. This is the shocking result of a US-American study. Only heart and respiratory diseases are more frequently the cause of patient death. The trade association (BG) accident and emergency clinics have recognized the problem and are now launching a collaboration with Lufthansa Aviation Training (LAT). 1,000 medical staff will learn social competencies from pilots over the next three years. In two-day courses, doctors and nurses will practice how to avoid mistakes made through poor communication, using example videos, role pay and in discussions.

But why are pilots taking over the training for medical staff? Both professions work in hierarchies and have to make decisions in highly complex situations. “The difference,” says LAT project manager Martin Egerth, “is that pilots are prepared for the day that hopefully will never occur, and the doctor experiences this every day.” And despite this, the airline sector is further along: “In aviation, we already recognized in the 1990s, that we need these social competencies and that these are just as important as technical and procedural skills,” says Martin Egerth. There have been several cases in which communication errors led to catastrophes. For example, in 1989, when an aircraft in Dryden in Canada took off with frozen wings and crashed shortly afterwards. 24 people died in the crash. A flight attendant had noticed the ice before take-off, but had not reported it to the pilot.

There are also similar cases in medicine, says Reinhard Hoffmann, Medical Director of the Frankfurt Accident Clinic and General Secretary of the German Association of Orthopedics and Emergency Surgery. The association developed the training together with LAT. Hoffmann says that he once noticed during his time as an assistant physician of a renowned doctor, that this doctor was operating on the wrong patient. “But I was too scared to say anything.” Just like the flight attendant in Canada in 1989.

But this does not just revolve around deaths in medicine: 25 percent of patients in hospitals are involved in avoidable events. In 2016, civil aviation, by contrast, was as safe as never before. Time pressure, a lack of communication or wrong hierarchy thinking are considered the cause of human error. While interpersonal training is a legal requirement in aviation, medicine is still at the beginning of a development towards greater patient safety. And quite incidentally LAT is acquiring a whole new customer group. The BG clinics are investing a six-digit figure in the project. Further information is available at www.interpersonal-competence-training.com​