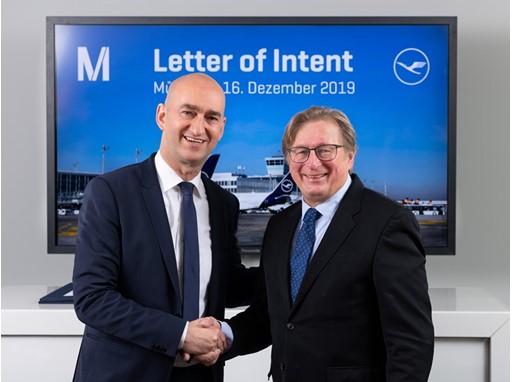 Extension of partnership and expansion of Terminal 2

Flughafen München GmbH (FMG) and Deutsche Lufthansa AG (DLH) are planning to intensify and continue their strategic cooperation in the sustainable development of the Munich hub. In a "Letter of Intent" (LoI) signed today, the two partners announced their joint intention to extend the Terminal 2 satellite building by a new pier at right angles to the east. Like the satellite building, the extension follows the climate and environmental principles of the partners.

The planned investments will increase the passenger capacity of the Terminal 2 system operating nearly at its limits as of today by up to ten million passengers per year. The aim is to create the conditions at the Munich hub for the foreseeable increase in passenger demand while maintaining the same high level of passenger service quality. The Terminal 2 system, like the airport as a whole, aims to be CO2-neutral by 2030. In the coming years, Lufthansa will also continue to invest in a modern fleet in Munich with new, more fuel-efficient aircraft such as the Airbus A350-900, which generates around 25 percent less CO2 and up to 50 percent less noise than its predecessors. As of today, Lufthansa already operates its most sustainable long-haul aircraft, including 15 A350s, at its Munich hub.

In the course of the preliminary planning phase now initiated for the expansion project, FMG and Lufthansa will specify their requirements for the future pier. The details of their upcoming cooperation will then be agreed in a Memorandum of Understanding (MoU). "We are thus laying a strong foundation for the successful continuation and expansion of our cooperation, from which not only both companies but also Bavaria as a business location will greatly benefit," said Munich Airport CEO Dr. Michael Kerkloh at the signing of the Memorandum of Understanding. Dr. Kerkloh continued: "Together, the airport and the airline stand for a sustainable and climate-friendly future at the Munich hub."

Wilken Bormann, CEO Lufthansa Hub Munich, adds: "Flying is a central part of our modern world. This makes it important to develop air traffic even more sustainably in the future. Once again, we are demonstrating at Munich as a premium location how we can shape the future responsibly in a system partnership that is lived and breathed. In order for this to be fully successful, a direct long-distance rail connection to the airport is more necessary than ever. Only that will make it possible for the different modes of transport to interact effectively in the future, which will in turn enable us to reduce ultra-short distance flights."

The partnership between Munich Airport and Lufthansa in establishing and expanding the airport as a major hub began back in the 1990s. With the joint construction and operation of Terminal 2 opened in 2003, the two companies have launched a cooperation model that is unique in Europe and established Munich Airport as an efficient hub for global air traffic. The satellite building, which went into operation in April 2016, marked the first expansion stage for this highly successful joint venture.