Lufthansa receives 10th Airbus A350-900: The eye catcher at the Family & Music Days at Munich Airport 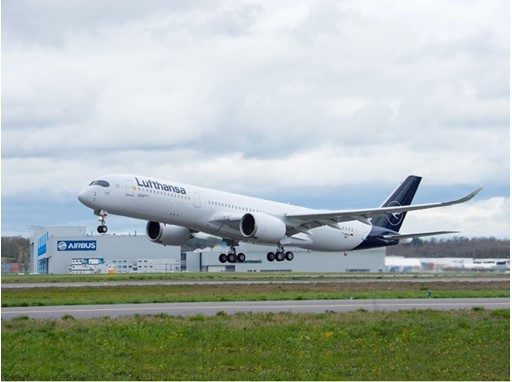 Lufthansa is expecting the arrival of its tenth Airbus A350-900 today. The aircraft bearing the registration D-AIXJ is named after the town of Erfurt, and is expected to land at its future home base in Munich around noon. A few days later, the A350-900 featuring the new Lufthansa livery will be one of the main attractions at the Family & Music Days at Munich Airport: On the 9th and 10th of June, the world's most modern long-haul aircraft can be experienced close up. Aircraft fans should not miss the opportunity on Saturday, the 9th of June, when all visitors - young and old - can view the multi-award-winning cabin. The aircraft is open for viewing between 11 a.m. and 5 p.m. on that day only.

The A350-900 is the most modern and environmentally friendly long-haul aircraft in the world. It consumes 25 percent less jet fuel, generates 25 percent less emissions and is significantly quieter on take-off and landing than comparable aircraft types. The first of 15 aircraft entered service from its Munich base in February last year. The A350-900 can seat 293 passengers: 48 in Business Class, 21 in Premium Economy Class and 224 in Economy Class.

Note to editors: Media representatives can view the A350-900 at 11 a.m.  Please let us know whether you wish to attend by sending an email to presse.muenchen@dlh.de.