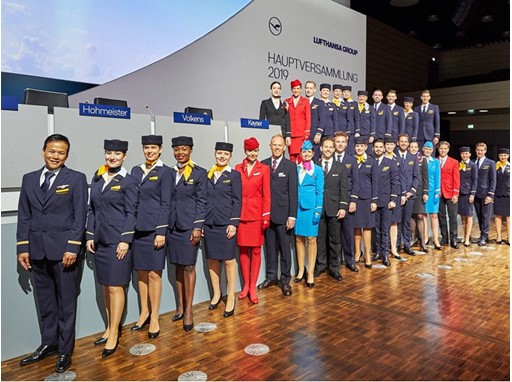 "Lufthansa Group has become even stronger, more efficient and more modern," says Carsten Spohr, Chairman of the Executive Board of Deutsche Lufthansa AG. "We are Europe’s number one."

As in the previous year, the Executive Board and Supervisory Board of Deutsche Lufthansa AG have proposed a dividend of 0.80 euros per share to the Annual General Meeting. Based on the year-end closing price in 2018, the dividend yield would amount to four percent. This dividend is intended to enable shareholders to participate appropriately in the company's success while maintain the company's capacity for investment and innovation.

In 2018, Lufthansa Group revenue rose to a new record level of 35.8 billion euros. At 2.8 billion euros, adjusted EBIT was only slightly below the previous year's record level, despite a significant burden due to fuel costs that increased by 850 million euros, one-time expenses for the integration of parts of Air Berlin, and significantly higher expenses for delays and flight cancellations. As a result, the adjusted EBIT margin also declined slightly to 7.9 percent. The group’s network airlines – Lufthansa, SWISS and Austrian Airlines – even exceeded their previous year's results. In addition to continued strong demand, the good result was based in particular on further cost reductions. Unit costs adjusted for fuel and currency effects were reduced by 1.7 percent in 2018.

For the full year 2019, Lufthansa Group continues to expect revenue growth in the mid single-digit range and an adjusted EBIT margin of 6.5 to 8.0 percent.

Lufthansa Group continues to consistently focus on innovation. The network airlines have launched the biggest product offensive of all time and are investing a further 2.5 billion euros in new seats in all classes, a significantly larger lounge offering and the expansion of digital services.

Eurowings has established itself as number three in European point-to-point traffic and is the clear number one in its home markets in this segment. Last year, Eurowings integrated 77 aircraft that had previously flown for Air Berlin and hired 3,000 additional employees.

Lufthansa Cargo is pushing ahead with the consistent digitalization of the freight chain. Lufthansa Technik is successful thanks to its own innovations and digital business models and today maintains one in five aircraft worldwide. LSG is driving the strategic realignment of its business. Nevertheless, Lufthansa Group is examining whether LSG could have even better development opportunities with a new ownership structure.

Every year, Lufthansa Group invests around three billion euros in efficient and quiet aircraft. The company has currently ordered 221 aircraft, which will be delivered to the group by 2027. Most recently, the group ordered 40 ultra-modern long-haul aircraft in March. These aircraft alone help avoid 1.5 million tons of CO2 emissions per year. Since this year, the Lufthansa Group has also been offsetting the CO2 emissions of all its employees' business flights with the climate protection foundation "myclimate". All buildings on the ground are to be supplied with green electricity by 2030 and all vehicles are to be converted to an emission-free drive system wherever possible.

"We need growth. But we do not need blind growth, we need high-quality, sustainable growth. Tickets for less than ten euros – as offered by some of our competitors – are economically, ecologically and politically irresponsible," says Carsten Spohr.

With a view to operational stability, the Lufthansa Group has significantly reduced its planned growth. The company is also investing around 250 million euros in more than 400 individual measures. The number of spare aircraft has been increased to 37, additional buffers of five to ten minutes have been planned into the ground times of aircraft and 600 additional employees have been hired to stabilize flight operations.

"Only the achievements of the European Union made it possible for the Lufthansa Group to become number one in Europe. With 3,000 flights per day within Europe alone, we connect people in Europe with each other – and with our long-haul flights, we connect Europe with the world. That is why we want to take a stand and stand up for the European idea. For a united and free Europe. We at Lufthansa say 'Yes' to Europe out of deepest conviction," says Carsten Spohr.