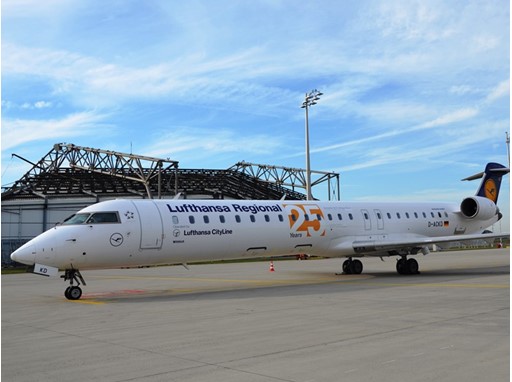 October 19, 1992, was a special day for Lufthansa CityLine: It was the world’s first airline to receive a Canadair Regional Jet (CRJ). Lufthansa was a major driving force for the start of the series, and to this day, 35 CRJs of the latest generation form a crucial part of the fleet of Lufthansa CityLine. From today onwards, a CRJ900 will therefore carry a large-scale special logo with the anniversary message across Europe.

The concept of a twin-engine regional aircraft, which combines the flexibility of smaller, usually propeller-driven engines with the comfort and travel speed of jet engines, was revolutionary at the time. Over the past two and a half decades, the CRJ underwent continuous further development. Today’s CRJ900 is hardly comparable to the first model. Based on the original 50-seater CRJ100 and CRJ200, the CRJ700 evolved. Today’s CRJ900 is a veritable medium-haul aircraft with around 90 seats that serves European destinations from Ancona to Zagreb at Lufthansa CityLine. Many core elements have remained the same, however: Passenger comfort, its specific seating capacity which makes the connection to regional destinations economically viable, short turnaround times and its agility in flight, which is not only a joy for pilots.

„Back in 1992, nobody would have dared to expect the CRJ series to become the success story we know today. For Lufthansa CityLine, the CRJ has always been the backbone of our fleet during the past 25 years, and we will continue to work very closely with our friends at Bombardier in the future” emphasizes Jörg Eberhart, Managing Director Operations at Lufthansa CityLine. Carsten Wirths, Managing Director Commercial, adds: “We value the flexibility, reliability and efficiency of this aircraft family. These characteristics are central to our success as a modern airline. We are proud to have been first to realize these values, and we profit from them to this day.”