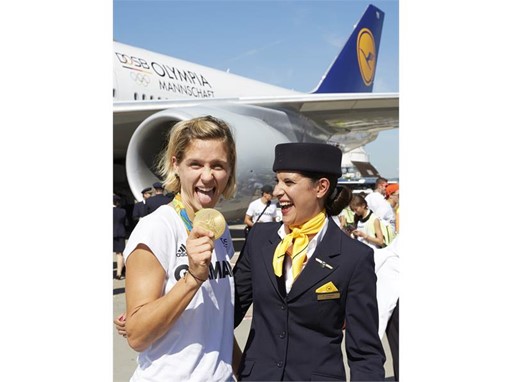 The German Olympic team has returned home, landing on time at 11.10 a.m. local time at Frankfurt Airport with flight number LH 511. The Boeing 747-8 with the registration
D-ABYK was specially branded in a custom “Olympia Siegerflieger“ design. Around 250 athletes were on board, amongst them gold medal winners in beach volleyball Laura Ludwig and Kira Walkenhorst, double-gold canoeist Sebastian Brendel, the gymnasts who won bronze with Sophie Scheder and many others.

After landing at Frankfurt Airport and taking a photo of their arrival in front of the plane, the German athletes went with a police escort directly to Frankfurt downtown to Römer Square, where they are welcomed by Federal President Joachim Gauck.

More than 50 international Olympic delegations use the services offered by the Lufthansa Group. The official Swiss Olympic delegation is also travelling back today on SWISS flight LX 93 from Rio de Janeiro to Switzerland. The Boeing 777-300ER will be ceremoniously received at Zurich airport with a shower of water. Among the passengers the gold medallists in the lightweight men’s four rowing and the mountain biker Nico Schurter are on board.