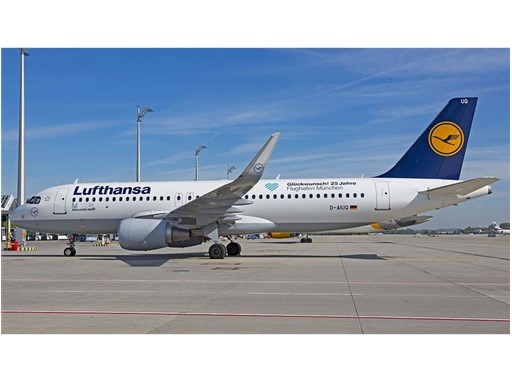 “Happy Birthday!  25 Years Munich Airport.” This is the branded message a Lufthansa Airbus will be carrying throughout Europe. The plane can also be seen on Saturday, May 20 during Family Day - the airport’s big birthday celebration suitable for the whole family. The message will stay on the Airbus A320 with the registration D-AIUQ until fall. “We have chosen this unusual birthday greeting because we are celebrating a shared 25-year success story. The growth of Lufthansa in Munich is closely connected with that of the airport. Such a close partnership is unique worldwide,” says Wilken Bormann, CEO of Hub Munich.

The partnership between Lufthansa and Munich Airport goes back to the very beginning. On May 17, 1992 a Lufthansa Boeing 737 was the last aircraft to depart from the airport in Riem, shortly before 11:00 PM. The following morning, two Lufthansa planes, named “Erding” and “Freising”, landed at the same time on the south and north runways of Munich Airport. The first plane to takeoff at the new airport also bore the Lufthansa logo: on the next day, at 5:59 AM, a Boeing 747 took off on an Alpine scenic flight carrying honored guests.

The first steps in developing the future Lufthansa hub in Munich were taken as early as in1995 with the deployment of two long-haul Airbus A340 aircraft. Three years later, the Lufthansa management board approved the airline’s involvement in what would eventually become Terminal 2. For the first time, an airline and an airport were planning, financing, and building a terminal together. The terminal building opened in 2003, fully tailoring to the needs of transfer passengers. Terminal 2 laid the foundation for more rapid development at the Munich Hub. Just one year after opening, it hosted its ten millionth passenger. In 2010, the supervisory boards of Flughafen München GmbH (FMG) and Lufthansa approved an expansion in the form of a satellite building, which opened in April 2016. Since then, Terminal 2 has the capacity to handle 36 million passengers. Another milestone followed in February 2017 – as Lufthansa and Munich Airport welcomed the first A350. In the future, 15 of these most modern and environmentally friendly long-haul aircraft will be based at the Munich Lufthansa hub. Shortly afterwards, the next joint success followed: Munich Airport’s Terminal 2 was named the best terminal in the world at the London Skytrax Institute’s 2017 World Airport Awards.