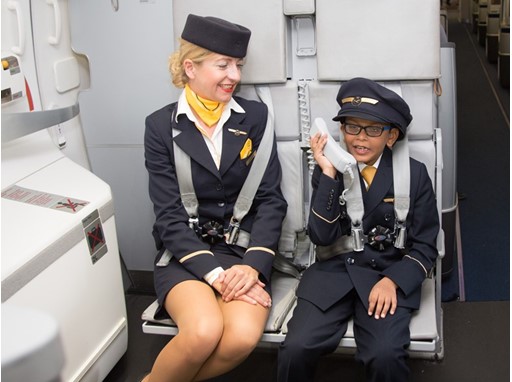 India’s Yashas Dassani, a spontaneous nine-year-old boy from Mumbai recently stepped into the shoes of Lufthansa’s airline cabin crew and made the first live onboard ‘announcement by a kid’ on flight LH 756 from Frankfurt to Mumbai in the presence of more than 350 passengers. Yashas had outclassed children from several other countries to Lufthansa’s global ‘Your Announcement Contest​’.

As the winner Yashas received a once-in-a-lifetime opportunity to be part of the Lufthansa cabin crew to make a live on board announcement. Before stepping aboard, Yashas visited Lufthansa`s crew premises at Frankfurt airport where he received his own flight attendant uniform. A Lufthansa pilot then explained to Yashas how the crew prepares a long-haul flight and invited him to have a closer look at a Boeing 747-400.

On board flight LH 756 Yashas welcomed the passengers travelling from Frankfurt to his hometown Mumbai. After the announcement the passengers broke into applause and congratulated him for doing a great job. Shortly before landing his voice was heard in cabin again, saying good bye to the guests.

Yashas was on his way back from a trip through several European countries as he had also won flight tickets to a European Lufthansa destination of his choice for himself and his parents.

This first-of-its-kind exciting online competition by Lufthansa Passenger Airlines was launched in early 2016. The contest had received 250-plus registrations from children aged between six to ten years from nine countries across the world. A jury comprising of Lufthansa experts shortlisted the 15 of the most imaginative onboard announcements from the videos received. The winning video​ was determined through an online public poll. It had featured Yashas welcoming passengers on board Lufthansa Flight 007 with a hearty Namaste! An avid tennis and football buff, Yashas is a student at Mumbai’s G.D. Somani Memorial School. He has nurtured the desire to fly Lufthansa since his first visit to the airport at age three, and this desire coupled with his creativity led to his participation in the contest.