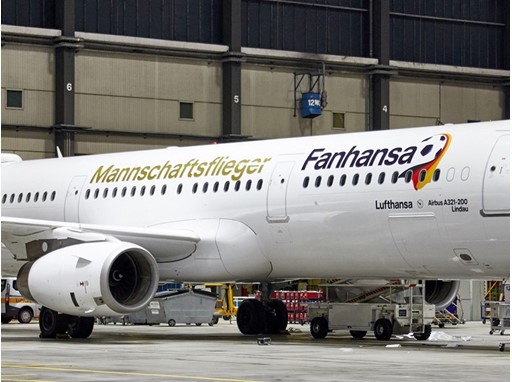 The German National team will be taking off for the World Cup aboard Lufthansa special flight LH2018 today.The "Mannschaftsflieger", which is christened with the city name “Lindau”, will take off from Frankfurt Airport at 1 p.m. heading for the World Cup in Russia. On board will be 122 passengers and nine crew members, including the national players, trainers and team coaches. The flight time from Frankfurt (FRA) to Vnukovo Airport (VKO), some 2,000 kilometres away, is three hours and five minutes. The team is expected to land at 17:05 local time.

Lufthansa Technik was responsible for attaching the “Mannschatsflieger” livery on the Airbus A321 with the identification D-AISQ for this special occasion. In addition, the, well-known Fanhansa logo from the World Cup in 2014 is also on the fuselage of the aircraft. The welcome panels next to the first two doors on the left side are signed by the players of the German National team. Spiriant, a LSG subsidiary has embroidered the headrest of the seats with the names of the players, which will remain on board during the duration of the World Cup. So those who fly with the "Sierra Quebec" in the coming weeks will have the chance to sit in the seats of players like Neuer, Hummels, Kroos, Müller und Co.

Culinary delights include meals and snacks specially prepared to meet the athletes’ dietary preferences. For this flight, LSG Sky Chefs, the catering specialist of the Lufthansa Group, created a four-course menu especially for the German Team: Spiced salmon topped with Frankfurt’s "7 herb pesto", celery salad and Oyster mushrooms awaits the team as an appetizer. For the main course, they can choose between a Poulard breast with grilled vegetables, a cod fillet with curry-mustard crust or an Asian, vegetarian vegetable curry with basmati rice. Finally, a selection of cheese and white chocolate mousse with mango puree will be served. As healthy snack alternatives, cranberry almond, cocoa or vanilla bars will be available on this flight.

Lufthansa Group offers additional flights to Russia for the World Cup
The Lufthansa Group is offering 85 additional flights to and from Russia for the World Cup. This means that football fans have 18,000 more seats than usual to travel to the tournament and support their team. Lufthansa is increasing its range of flights from Frankfurt from four to up to six, in Munich from two to up to four daily connections to Moscow (Domodedovo). Between Frankfurt and Moscow, an Airbus A330 will also operate once a day except Fridays from 1 June to 31 July.

Follow the World Cup on board of Lufthansa
During the tournament, passengers on Lufthansa long-haul flights will be able to watch World Cup matches via the live TV channels on the screen in their seats as well as on their personal device (via FlyNet connection).