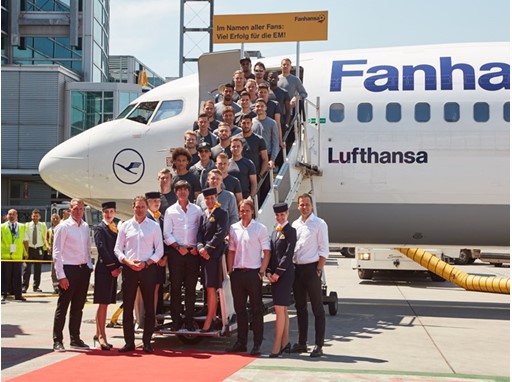 The German national team departed from Frankfurt Airport today with Lufthansa special flight LH342 for the European Championship in France. At exactly 14:02, the “Fanhansa” aircraft, with Captain Ulrich Pade and First Officer Rafael Gabel in the cockpit, took off from runway 18 West after having left parking position at 13:49. On board were the national team, coaches and team staff as well as other DFB (German Football Association) representatives. The flight from Frankfurt (FRA) to Chambery Savoie Airport (CMF) near the team accommodation takes 1 hour and 20 minutes.

"We are proud that we, as the ‘Official Carrier’ of the DFB, may again fly the national team to another major tournament. Many Lufthansa employees are already in football fever and are keeping their fingers crossed for the German team," said Klaus Froese, CEO Lufthansa German Airlines Frankfurt Hub, at the send-off in the Lufthansa First Class Terminal in Frankfurt.

Last week, the Boeing 737-300 aircraft type with the registration D-ABEK received special lacquering from Lufthansa Technik for the occasion. In addition to the well-known “Fanhansa” logo from the 2014 World Cup, the names of fans now decorate the aircraft’s fuselage. Among more than 65,000 online applications, around 300 winners were drawn to symbolically accompany the national team on their flight to the European Championship.

"After the very emotional return from Rio with the Fanhansa winner’s plane, we are delighted that Lufthansa has again made a special plane available to us. The support of the fans is hugely important for the team. Therefore, it is a wonderful signal that so many people have applied to co-design this fan plane" said Oliver Bierhoff, manager of the national team.

In regular service, the aircraft has 140 seats in Business and Economy Class. For the special flight, the entire cabin is set-up in business-class standard. The catering on board has been tailored to the needs of athletes: Sandwiches with beef pastrami or vegetarian ones with cream cheese, a colourful fruit plate and the entire range of nonalcoholic beverages available on Lufthansa flights.

For the first time in 2014, on the occasion of the World Cup in Brazil, Lufthansa traded its name for "Fanhansa" on the fuselage of part of the fleet and for a limited time. The climax of the campaign was the “Fanhansa Siegerflieger” which flew the newly crowned world champions from Rio to Berlin. The Boeing 747-8 still delights on its flights around the world and will continue to fly until the World Cup in 2018.

Lufthansa is engaged as the "Airline for sport" for many popular sports. In addition to the long-standing cooperation with the German Football Association (DFB, since 2005), Lufthansa also works with FC Bayern München (since 2004) and Eintracht Frankfurt (since 2008) football clubs. In addition, the airline is a national sponsor for the German Sports Aid and is a longstanding partner of the German Olympic Sports Confederation (DOSB).