Female pilots taking off: Women have been flying for Lufthansa for 30 years 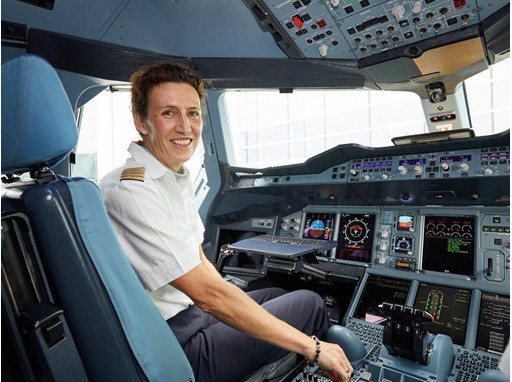 They completed their pilot training at the commercial pilot school in Bremen in the 154th junior aviator training course together with 14 male cockpit contenders. The training program was supplemented with flight hours over the desert near Phoenix, Arizona. After two years of preparation, Lisy and Hetzmannseder successfully completed their flight training on a Boeing 737 in the second week of August 1988, in the Canadian city of Montreal. As is customary, they then flew with check pilots (instructors and examiners) on the European routes of the airline as second officers for a few months before taking the first officer’s seat in the cockpit of a Boeing 737-200. Approximately ten years later, Nicola Lisy wrote aviation history again when she gained entrance into the last male domain of the airline and became Lufthansa’s first female captain on January 31, 2000. Her “co-pioneer” Hetzmannseder joined her soon after, advancing to the rank of captain in February 2000.

Central goal: increase the proportion of women in Lufthansa cockpits

The prospects are good: 15 percent of all prospective pilots in the current training courses of the European Flight Academy, which trains pilots for all Lufthansa Group airlines, are female. And Lufthansa Aviation Training is actively looking for additional female applicants. For instance with the help of a focused ad campaign for women that will kick off in the near future.

When the first women were accepted into pilot training, they were entering a traditionally male domain. Today, this is no longer an issue. “It is perfectly natural that women take part in our training courses and their performance is in no way inferior to that of their male colleagues. Everyone who has succumbed to the fascination of flying strives towards their professional goal of becoming a pilot with great determination – another aspect in which we have not observed any difference between the sexes,” says Stefan-Kenan Scheib, Process Owner Pilot Schools Lufthansa Group and A320 captain at Lufthansa.

“Being a pilot is the perfect job”

Magdalena Gruhn (29) is one of four female student pilots in the current year of the European Flight Academy. Working in her previous position as a flight attendant, Gruhn saw a female pilot in the cockpit and thought: “Women can do that, too. I want to make it up there!” The biggest challenges during a flight are coordinating, controlling and anticipating multiple things at once. However: “There is no reason why women shouldn’t be able to do this.”

This conviction is shared by Elke Hieber (53), who began her training course at Lufthansa in 1988 as the only woman in a group of 17 trainee pilots. She is now one of two female captains in the crane’s A380 fleet. “Being a pilot is the perfect job, with exciting tasks and great flexibility that allows you to reconcile your family with your profession,” says Hieber, who, as a mother of two, took two periods of 18 months off and flew in various part-time models. She says that it takes a while sometimes for society to accept that your profession is not dependent on your gender: “Many women simply don’t think to apply for this job.”

On a side note, women have a long tradition in the history of flying. On March 8, 1910, Raymonde de Laroche was the first woman in the world to receive her pilot license from the Aéro-Club de France. In the 1930s, Marga von Etzdorf operated a Junkers A50 named “Kiek in die Welt”, having already flown Junkers F13 commercial airliners for the former Luft Hansa as a co-pilot in 1927. After this, however, another 60 years would pass before a woman sat in a Lufthansa cockpit again.