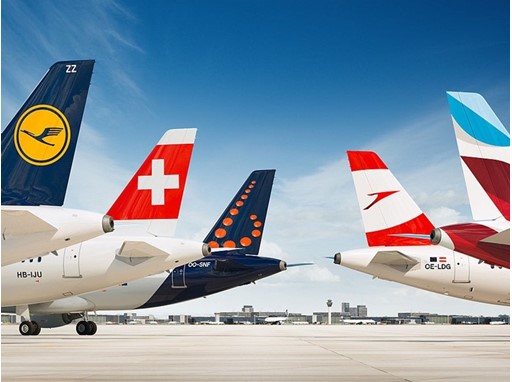 The airlines in the Lufthansa Group – Austrian Airlines, Brussels Airlines, Eurowings, Lufthansa and Swiss International Air Lines – will be an even more attractive option for holidaymakers this summer. As always, passengers can rely on the high standard of service, quality and reliability of the Lufthansa Group.

In the forthcoming 2017 summer flight timetable, the airlines will offer their customers precisely 23,476 flights each week around the world. This summer, the Lufthansa Group airlines will link 308 destinations in 103 countries via their hubs in Frankfurt, Munich, Zurich, Vienna and Brussels, but also via many point-to-point routes. These services will be supplemented by more than 18,000 code-sharing flights with some 30 partner airlines, offering passengers a network which almost spans the globe. The summer flight timetables for the individual Group airlines apply from Sunday, 26 March 2017 until Saturday, 28 October 2017.

The main news from the Lufthansa Group airlines:

Lufthansa is adding new attractive tourist destinations to its European flight timetable for the forthcoming summer season 2017. Lufthansa flies its holiday passengers to the “best weeks of the year” with the service of a scheduled airline – whether it’s for a beach holiday, an expedition or a city break.

From the end of March 2017 for the first time, there will be three flights a week from Frankfurt to Santiago de Compostela (Spain). Bordeaux (France) is on Lufthansa’s flight plan from Frankfurt twice a week for wine fans and sun-seekers. Flights leave on Thursdays and Sundays for the metropolis on the Gironde, the economic, political and cultural capital of south-west France.

Lufthansa is offering flights to Shannon (Ireland) once a week from Frankfurt. Shannon is in County Clare, one of Ireland’s most popular holiday regions.

The programme of summer destinations from Frankfurt is completed by Pula in Croatia and the Baltic resort of Heringsdorf.

Last but not least, fans of the flower island of Madeira will be happy, because Lufthansa is now offering flights to Funchal (Portugal) from Frankfurt all year round, not just in winter. And Frankfurt–Paderborn is now back in the Lufthansa flight plan, too.

Starting this summer, Lufthansa will be extending its route network from Munich to include two great new flight destinations. Beginning 28 March 2017, there will be flights six times a week from Munich to Nantes, located in the Pays de la Loire region of France. Additionally, at the beginning of the Easter holidays, on 9 April 2017, Lufthansa will, for the first time, offer flights from Bavaria‘s capital to Santiago de Compostela in northern Spain. From 27 March 2017 onwards, there will also be flights departing from Frankfurt every Monday, Thursday and Friday to the pilgrimage destination in Spain. This summer travelers will also have the chance to fly non-stop to Marrakech for the first time. There will be flights twice a week to the Moroccan royal city - popular with lovers of culture - departing every Friday and Sunday.

Aside from these new destinations, the summer flight schedule is also being expanded to include more flights to some already popular destinations. There will be more weekly flights to Malta, Cologne, Dublin, the Romanian city of Sibiu, Geneva, Graz and St. Petersburg.

North America fans starting from Munich will be happy too - both the Canadian city of Montreal and Denver in the USA will be featured daily in the future flight program. There is also something special coming for Lufthansa passengers traveling to Boston - from 14 March 2017 onwards, the new Lufthansa A350-900 will be flying to this city in Massachusetts. A third A350-900 service will start to Mumbai in the second half of April. This aircraft is currently the most advanced and most environmentally-friendly long haul aircraft in the world.  If you don't want to wait until then for this amazing new flight experience, starting 10 February 2017, you can fly with the Airbus A350-900 to New Delhi. Lufthansa will be operating daily flights to the Indian capital throughout the summer.

Austrian Airlines is adding another long-haul destination in North America to its 2017 summer flight timetable. From 10 April 2017, there will be up to six flights a week with a Boeing 777 to the biggest city in California, Los Angeles (USA). Austrian Airlines will offer a total of up to 44 weekly non-stop flights to North America in the 2017 summer flight plan. They include up to five flights a week to Miami, up to six a week to Los Angeles and Toronto, and up to seven connections a week to Washington and Chicago. Austrian will continue to offer a total of 13 flights a week to Newark and JFK in New York. The airline will be adding a second long-haul destination to its portfolio in 2017. From 25 October 2017, there will be a non-stop flight every Wednesday from Vienna to the Seychelles in the Indian Ocean. Austrian Airlines will offer its passengers a wide range of up to 130 destinations in total in its 2017 summer flight timetable.

Eurowings will continue to expand its long-haul programme from Cologne/Bonn in the forthcoming 2017 summer flight timetable. From June, passengers can fly twice a week to Las Vegas (USA). Windhoek (Namibia) is the first route to Africa to feature in the flight timetable. Another new destination from Cologne is the iconic German island of Sylt. It will be served with three flights a week, with one flight a week to the Greek island of Karpathos. Then there are the eastern European cities of Pula (Croatia) and Cracow (Poland), with two and six flights a week respectively from Düsseldorf.

For passengers who don’t want to fly far for their sun and sand, Eurowings is flying three times a week to Ibiza (Spain) and once a week to Cagliari (Sardinia) from Hanover this summer. Our passengers also have the opportunity to fly to Faro, on the Portuguese Algarve, twice a week.

Passengers can also fly from Berlin Tegel to Faro (Portugal) every Sunday and to the Greek island of Mykonos once a week.

There are also two new connections for Eurowings passengers from Stuttgart. They can fly three times a week to Pisa (Italy) and once a week to Cyprus.

Two Airbus A320s are initially to be stationed at the new Eurowings base in Palma de Mallorca from the end of May 2017. In the summer, they will fly from Mallorca to Paderborn/Lippstadt, Münster/Osnabrück and Saarbrücken, as well as to Basel in Switzerland.

Eurowings is offering a total of 32 new routes from Munich for the first time, starting in the summer. They include six connections a week from Munich to Paris, London and Amsterdam, along with three to Naples and two to Mykonos.

Swiss International Air Lines (SWISS) will expand its capacity from Zurich and Geneva in the forthcoming summer flight timetable. From 22 April 2017, SWISS will operate new daily services from Zurich to San Francisco (USA) with the Boeing 777-300ER. Between June and October 2017, the Boeing 777-300ER will also be in service on six of the 12 weekly connections to Chicago. SWISS will add five new seasonal destinations to its summer flight plan: Bergen, Cork, Figari, Niš and Sylt. Introducing additional Bombardier CSeries aircraft in Zurich and Geneva will enable SWISS to offer its passengers even greater comfort on European routes. Edelweiss, the sister airline of SWISS, will begin services to the Greek island of Zakynthos in the summer season.