Around the world with "Goldhähnchen" and Christmas Songs 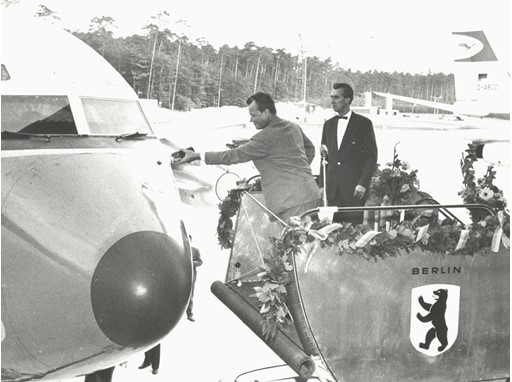 “And her name is... ‘Erfurt!’” The tenth Lufthansa A350-900 was christened in Munich. In the presence of Andreas Scheuer, Federal Minister of Transport and Digital Infrastructure, the D-AIXJ received the name of the Thuringian capital in a ceremonial naming ceremony. It thus joins the other "A350 cities" of Lufthansa Airlines, such as the "Nuremberg", the "Saarbrücken" or the "Bochum".

The naming of aircraft has been a tradition at Lufthansa for decades. Already in 1926, the year of its foundation, the Luft Hansa awarded the first names to its aircraft, which are unimaginable today. The Junkers F-13 aircraft usually flew with bird names such as "Nachtigall” (Nightingale) or "Goldhähnchen” (Kinglet), and Dornier aircraft bore names such as "Luchs” (Lynx) and "Wildkatze” (Wildcat).

Angela Merkel christened the "Deutschland" – and an A340 recalls 9/11

Since the beginning of the jet age at Lufthansa in 1960, Lufthansa aircraft have carried the names of German federal states, cities and municipalities; since the entry into service of the A380, also the names of major cities worldwide. In addition, there is another particularity: on 18 November 2015, German Chancellor Dr. Angela Merkel baptized the A380 D-AIMN on the name "Germany".

With another unusual aircraft baptism Lufthansa sent a sign of gratitude: In 2002 the Airbus A340 D-AIFC was named after the cities of Gander and Halifax. Following the terrorist attacks of 11 September 2001, seven Lufthansa long-haul aircraft had to land in these two Canadian cities. Along with thousands of travellers from other airlines, Lufthansa guests spent up to a week in the two locations, receiving unparalleled support and assistance from all sides.

A solemn speech, a new name and a champagne bottle that shatters on the fuselage – the christening of aircraft goes back to the custom of christening new ships. These have long been a fixed ritual in seafaring.

Already in the 4th century BC the ancient Greeks gave their ships names, mostly of goddesses or other female figures of mythology. This was to appease the gods and put the ship and its crew under their protection.

Even today, the naming before the first voyage should bring luck to the ships and give the crew "always good voyage". In Europe, ships are still traditionally given female names. They are rarely named after cities, landscapes or regions such as the aircraft of Lufthansa Group Airlines.

And how do the other airlines of the Lufthansa Group do it? Well, each has its own concept with wonderfully individual features.

Where the edelweiss grows

Enjoy the breathtaking view of the Swiss mountains on an aircraft seat? Possible at least in some regions of Switzerland where the edelweiss flower grows. Since 2016, the Swiss Lufthansa subsidiary Edelweiss Air has been baptizing its aircraft at Zurich Airport on the names of the regions "where Edelweiss is at home".

Twelve machines now carry names like Blüemlisapl, Brienzer Rothorn or Chäserrugg on their fuselage throughout the world. In return, Edelweiss is gifting the regions a wooden bench in the shape of aircraft seats as a sign of the partnership. In addition, a signpost tells hikers the number of flight hours from the location to dream destinations of the Swiss holiday airline.

SWISS is also flying its regions around the world. SWISS long-haul aircraft carry Swissness into the distance with the names of the Swiss cantonal capitals and tourist regions.

Short and medium-haul aircraft advertise Swiss tourist resorts. The flying ambassadors are baptized by regional partners as well as by famous actors or singers.

But for special occasions there are numerous exceptions. For example in December 2017, an Embraer E195 with the identification OE-LWQ was named "Silent Night" in a Christmas ceremony to celebrate the anniversary of the famous Christmas song. The "Wiener Sängerknaben" (OE-LAE) and the "Salzburger Festspiele" (OE-LAX) are flying around the world painted on an Austrian Boeing 767.

A new Boeing 777 long-haul aircraft is now called "Sibanye". This is isiXhosa, one of languages spoken in South Africa, and means as much as "we are one". School children of the iThemba primary school in Cape Town, which is supported by the help alliance, did suggested some names and the Austrian employees chose "Sibanye" as the winner.

Lufthansa Cargo recently came up with something very special. Since the arrival of the new Boeing 777 freighters in 2013, many aircraft are greeting in various national languages of cargo destinations. Whether "Ni Hao, China", "Namaste, India", "Buongiorno, Italy" or "Jambo, Kenya": Each aircraft was baptized on its first landing on site.

This "Say hello around the world"-idea was born out of an online creative competition "Name the plane", in which employees and customers participated. Up to now eleven of the 17 aircraft greet perfectly internationally, five Boeing B777-F and six MD-11F.