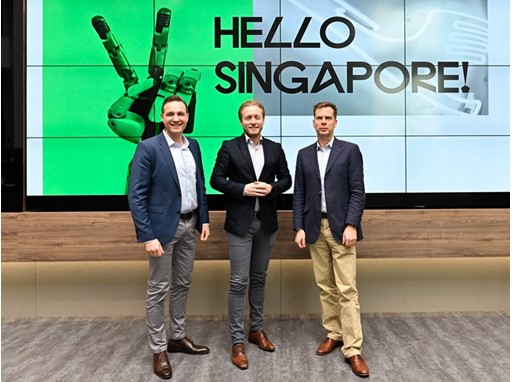 With over 100 guests from the Asian Travel & Mobility Tech ecosystem, international media representatives, and top executives of the Lufthansa Group the Lufthansa Innovation Hub (LIH) opened its first foreign office in Singapore on Monday, 28thof January.

The expansion of the aviation group’s digitalization and innovation unit, established in 2014, is a strategic response to the rapidly increasing importance of the Asian technology sector for the future of travel and mobility.

The focus of the LIH Singapore will initially be on an in-depth exploration of specific market developments in the context of the digitalization of travel and mobility, as well as on establishing a network of relevant tech players and the first strategic partners on site. This is the first initiative of its kind by a Western airline on the Asian continent. A first alliance with INSEAD has already been launched and further collaborations are currently explored with established players in the market:

The LIH and INSEAD in Singapore, one of the world's leading business schools, have concluded a research alliance on the topic "The Future of Work" and its explicit relevance for the transformation of business travel. The research project is led by Trend & Market Intelligence specialists of LIH in Singapore and Berlin. The aim is to publish key findings in a whitepaper and to implement them a test project, which will be validated in conjunction with the Lufthansa Group.

The research findings obtained are to be immediately validated under real-world conditions. In this context, LIH is in in discussions with WeWork, Singapore's Changi Airport, one of the most technologically advanced airports in the world, and also the Munich Airport, which operates its Terminal 2 together with Lufthansa Group.

"We look forward to exploiting the unparalleled dynamism of the Asian technology ecosystem even more consistently in the future and to leveraging the established position of the Lufthansa Group. Singapore is clearly a pioneer of mobility innovation and our first collaboration with INSEAD and other players strongly attests to how eager established local players are to experiment and explore," explains Gleb Tritus, Managing Director of the Lufthansa Innovation Hub.

The opening of an additional office in Shanghai, China is planned over the course of the year.The move to Asia with a focus on new, digital business models is part of the Lufthansa Group's digital strategy, which envisions a decisive expansion of digital activities along the entire travel and mobility chain as well as building a sustainable network with leading technology players.

"More than ever, Asian startups, but also digital enterprises, are the driving force behind fundamental changes along the travel chain. With the expansion of the Lufthansa Innovation Hub, we want to become a serious part of this emerging ecosystem, just as in our home markets," says Dr. Christian Langer, VP Digital Strategy Lufthansa Group and Managing Director Lufthansa Innovation Hub.

The local team currently being set up in Singapore is building on close cooperation with the existing Asian-Pacific organization of the Lufthansa Group on site to benefit in particular from their local market expertise and existing networks.