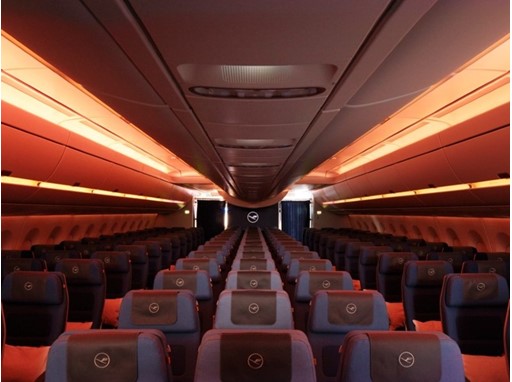 The Lufthansa A350-900 is not only the world's most advanced long-haul aircraft, it is also the first passenger aircraft worldwide to take the changing course of daylight as its role model. The A350-900 has now been awarded the 2018 German Lighting Design Prize award´s special prize for its extraordinary cabin lighting. "Up until now, lighting design has always been the manufacturers´ responsibility. Prescribing the lighting concept ourselves was uncharted territory for us, but we wanted to achieve real added value for our customers – to allow them to sleep better, arrive feeling more relaxed; ideally, to reduce jet lag," says Dr Reinhold Huber, who is responsible for new customer experience developments. The lighting concept was designed by the Kardoff engineering bureau in Berlin, and the award was presented to them today in Cologne. With this special prize, the Lufthansa A350-900 has now received a second outstanding award – the Lufthansa A350 Economy Class won the "German Design Award 2018" in the category "Excellent Product Design".

As the world's first airline, on board the A350-900 Lufthansa has installed a range of different lighting atmospheres in order to support the day and night rhythms of their passengers. Passengers who travel across several time zones know the problem – your body clock gets out of sync. For the first time, with the introduction of Lufthansa's new A350-900, it has become possible to work with passengers´ biorhythms by providing the right type of light at the right time. Warm light is used for relaxation in the rest phases, whereas cooler light encourages activity. In addition to this, the lighting is also used to create a pleasant restaurant atmosphere on board during meal times. In total, the LED technology on the A350-900 is being used for around 24 different lighting variations. In awarding the prize, the jury stated: "With the Lufthansa Airbus A350, the Kardoff engineering bureau has realised a lighting concept with meticulously defined lighting colors and has created innovative scenography, such as a restaurant atmosphere during meal times." To follow on from the A350-900, Lufthansa will now fit out the Boeing 747-800 which will also be flying with the new lighting concept on board.