“I want to understand flying completely” 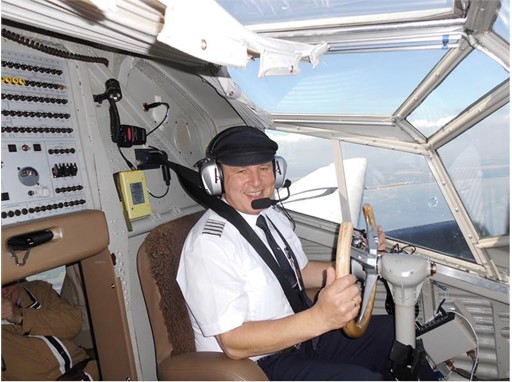 A380 captain Claus Cordes flies anything with wings

“I am supposed to come back to Frankfurt on Friday morning”, Claus Cordes notes down in his personal log book on 1st March 2017 at the Hong Kong Harbour View, the Lufthansa crew hotel in the southern Chinese city. “That will be it for the day, because 12 hour night flights like that do, of course, leave their mark. On Saturday I’m at the workshop at Discus, but on Sunday I’m free. What does the weather forecast say?”

The weathermen are kind to Claus Cordes: No rain in the Weser Uplands until Sunday evening, but there are isobars close together, promising a strong south-westerly wind. So Claus Cordes writes an email from Hong Kong to his gliding buddies in Lübeck: “Anyone up for gliding in Porta Westfalica on Sunday?” Jakob and Simon, who haven’t been in the air all winter, are. They take off next to each other on Sunday with Cordes and his Bergfalke II (year of manufacture 1958), and fly 400 kilometres between the Wiehengebirge mountains and Ith. In the evening, Claus Cordes happily notes in his log book: 4 hours, 13 minutes. A rather perfect day in the life of a glider.

The avid flyer Claus Cordes (57) has been striving for nothing less than perfection for decades. “I want to understand flying completely”, says the A380 captain and adds modestly: “I don’t quite have it yet – but I think I’ve made good progress.”

In retrospect, the initial annoying waiting time was in fact a blessing for Cordes: following his training at the Lufthansa flying school in Bremen at the beginning of the eighties, he had to wait a year before he was able to fly – initially with the B737. Cordes made perfect use of his time. He did an internship at Lufthansa Technik in Hamburg where he learnt all about the inner workings of the aircraft he would later fly and then also started an engineering degree with a focus on aircraft construction.

And he flew whenever he had the chance and made extra money with sightseeing tours over Föhr island. At his aviation club in his home town of Lübeck he made a discovery: “Gliding is fascinating!” While at Lufthansa his ordinary career as a pilot brought him into the cockpits of the A310, the A320, the MD 11 of Lufthansa Cargo and finally, in 2013, the A380, his private flying life became ever more colourful.

For decades, Claus Cordes had been collecting aircraft models like other people collect valuable wristwatches or paintings. “So far, I have flown 87 different types of aircraft”, he says proudly. Since at one point he acquired a class 2 test pilot license and an instruction license for single engine aircraft weighing up to two tonnes, he occasionally does some work for the German Museum of Technology (DTM) in Berlin and flies archaic aircraft to the German capital from around the world. Even though sometimes it is only debris: in 2006, Cordes persuaded his then employer LHC to sponsor the transport to Germany of the wreckage of a Junkers F13 which crashed in 1933 in British Columbia in Canada: “It was something very close to my heart to bring back ‘Aunty Ju’s grandma’.” And of course Cordes himself flew the MD11 with the badly battered but historically valuable cargo, which now has a place of honour at the DTM in Berlin.

Fuel in his veins

Claus Cordes has been part of the flying team of the Ju52 since 1988, and since 1997 also as a trainer of pilots. Last June – between two A380 flights to Los Angeles and Delhi – he flew several sightseeing flights over the crowds of the Kieler Woche event in his native Schleswig-Holstein. The flights with “Aunty Ju” are of course among his very special aviation highlights; but the Ju52 is not just an aircraft, it is also a recognised “moving monument”, a fact which the northern German with a good dose of jet fuel in his veins does not find all that impressive.

Claus Cordes is probably the only person to own and fly two “flying monuments”: there is the Focke Wulf biplane (year of manufacture 1936) called “Stieglitz”; as often as possible he takes it on what for a layperson would be risky stunt flights starting from the grass runway at “Hungriger Wolf” airport near Itzehoe. And with such breathtaking perfection that he was named Oldtimer aerobatics champion in 2016. This year - and this worms him a little - it was "only" enough for the silver medal.

Cordes‘ “Bergfalke” aircraft was also recently given the status of “moving monument” by the city of Lübeck. The number 3 in the A380 captain’s private aircraft fleet is a super fast high-performance glider called “Discus”; at a recent competition, Cordes was bowled over by its fast-paced flight qualities: “What I found most impressive was the fact that even after more than 25,000 flight hours you still have the feeling of being a complete novice. You never stop learning.” Aircraft number 4 is Claus Cordes’ Christmas present to himself: he was recently offered a Schleicher Ka6 glider from 1956 with an open hood for such a bargain price “that I couldn’t say no”. It’s like flying in the year dot, when all you have in front of you is a small windscreen.

There is just one question remaining for the enterprising flight captain, who is also a sought-after guest lecturer at various universities in Hamburg, Berlin and even in Tashkent: what does your wife say, dear Claus Cordes, about you spending all your free time in some aircraft or other – with or without engine? The captain smiles, “Well, my Astrid always says: ‘I knew I was marrying a nutter.’ And that was 34 years ago.”

Well then, pilot, say hello to the sun for me…!