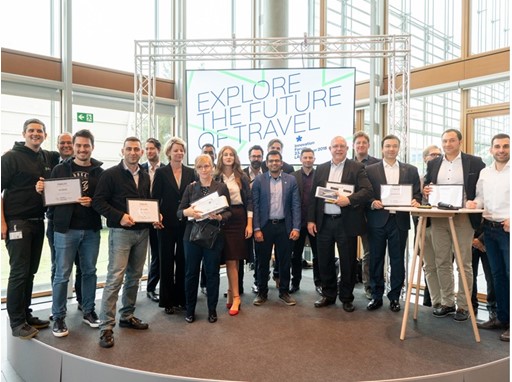 Self-coordinating drones. Private business aircraft that can be booked quickly and transparently without intermediaries. Anonymized proofs of identity that use an encrypted identity signal to accelerate verification during the journey. These are just three blockchain applications of the teams competing in the final round of the Aviation Blockchain Challenge. The competition, organized by the Lufthansa Innovation Hub and SAP.iO Foundry, is the largest of its kind to date and aims to create specific use cases for decentralized networks in the aviation industry.

The nine finalists were selected from a total of 312 entries from 56 countries. Last week, they travelled to Frankfurt am Main to present their solutions at Lufthansa Group to a jury of experts and several hundred representatives of the Lufthansa Group Innovation Community.

„All nine finalists addressed deep-rooted challenges of the aviation industry and underwent various validation rounds. We deeply appreciated the business-driven approach to all posed problems, whereby the blockchain technology was essential to solving the problem rather than the other way round,“ said Artiona Bogo, Blockchain Business Development Manager in the SAP Innovation Center Network and member of the jury.

The 500Labs team, which is working on a decentralized flight data infrastructure for the global airline industry, won the “Airline Challenge". The technology permits secure and standardized data exchange in real time between all parties involved in flight operations such as airlines, airports, suppliers, and any other service providers. This enables a variety of blockchain-based functions that make air traffic more efficient. Transparency, for example, could speed up turnaround times for aircraft or minimize the negative effects of flight delays on all parties over the course of the flight day.

Sweetbridge was the winner in the category "Traveler Challenge". The startup has created a blockchain-based financial marketplace where various financial and treasury transactions can take place – from factoring to short-term financing. With the help of Sweetbridge, companies can operationalize partially tied up capital and use it elsewhere. Loyalty programs are just one compelling use case. Sweetbridge's marketplace logic makes earning and using loyalty points more attractive to all customers and vendors.

14bis Supply Tracking was distinguished in the category "Supplier Challenge". The startup has developed a blockchain-based application that makes the supply chain of aircraft components seamless and transparent in real time for everyone involved. The proprietary technology is compatible with the most common industrial software systems and thus provides greater transparency along the entire supply chain, resulting in higher efficiency and cost savings.

"We discovered outstanding teams and interesting blockchain applications in aviation worldwide and initiated an in-depth exchange between the best teams and experts from Lufthansa and SAP, which we will further intensify after the challenge. The first Aviation Blockchain Challenge was a great success for all participants, so the Lufthansa Innovation Hub will definitely continue the format in the future," said Christian Langer, Vice President Digital Strategy Lufthansa Group and Jury Chairman of the Aviation Blockchain Challenge.

The teams are currently exploring concrete applications with various specialist departments of the Lufthansa Group, including Miles & More, Lufthansa Technik, and Lufthansa Systems. Similarly, SAP will provide the winners with access to an extensive network of customers, which will enable the teams to further develop their ideas and scale their businesses.