Second Lufthansa A350-900 has landed in Munich 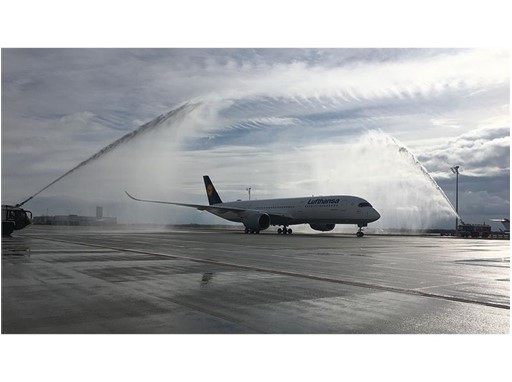 ​Today Lufthansa welcomed its second A350-900 to Munich. Flight LH 9921 from Toulouse landed at around 11:00 at Munich Airport. There was also a special welcome from the airport's fire service who received the new Airbus with a ceremonial fountain of water. Captain Georg Obermaier carried out the transfer flight from the Airbus works in Toulouse and is full of enthusiasm for the newest member of the fleet: "The A350-900 is rightly cited as the world's most advanced long-haul aircraft. It is unbelievably quiet and very efficient in its fuel consumption".

The crew are to complete their first training flights in the course of the afternoon. At 13:10 the second A350-900 will take off from the northern runway at Munich Airport and will fly to Leipzig (arrival at 14:00). After a short interim stop, the A350-900 will continue on to Cologne, where it will land for the first time at around 15:00. The return flight back to Munich is scheduled for 15:10 (landing at 16:00).

In February the first of ten aircraft arrived in Munich to be stationed there. The aircraft has capacity to carry 293 passengers - 48 passengers in Business Class, 21 in Premium Economy Class and 224 in Economy Class. The A350-900 is currently the world's most advanced and most environmentally-friendly long-haul aircraft. It uses 25 percent less kerosene, produces 25 percent fewer emissions and is significantly quieter on take-off than comparable types of aircraft.