Lufthansa Airbus A350-900 landed in Hamburg 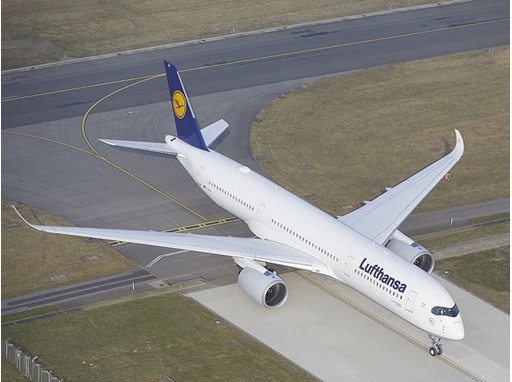 The Airbus A350-900, Lufthansa’s most modern, long-haul aircraft landed at Hamburg’s Helmut-Schmidt Airport today. Before landing, Flight LH 350 flew 700 metres above Hamburg’s newest landmark, the Elbphilharmonie concert hall. This flight altitude was predetermined by the German Air Traffic Control (Deutsche Flugsicherung) and based on the weather conditions, part of the flyover took place in the clouds. Unfortunately, a lower flyover was not possible as originally planned.

Just before that, employees working at the Airbus factory in Finkenwerder had the chance to admire the A350-900 during a fly-by. Within that same factory important parts were built for this aircraft.

Flight LH 350 then landed at Hamburg Airport where the new member of the Lufthansa fleet was welcomed by a gate event. On board the state-of-the-art A350-900 were passengers who were the first to snag tickets for this first special flight. Flight LH 350 from Munich to Hamburg and back sold out within a few minutes.

This is one of the most important events of the year for the Lufthansa Group: With the A350-900 the airline welcomes a highly modern addition to its fleet. The first ten Airbus A350-900 aircraft will be stationed in Munich starting 10 February 2017. The first destination is Delhi and Boston will be added to the list in March. The aircraft offers seats for 293 passengers: 48 seats in Business Class, 21 in Premium Economy and 224 in Economy Class. The A350-900 is the world’s most modern and environmentally friendly long-haul aircraft. It consumes 25 percent less fuel, produces up to 25 percent less emissions and is much less noisy than comparable aircraft types when taking off.