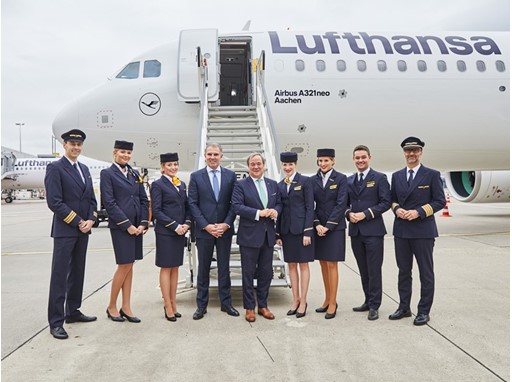 The name of Lufthansa’s first Airbus A321neo is “Aachen”. Armin Laschet, Minister-President of the German federal state North Rhine-Westphalia and a native of Aachen, signed the naming certificate of the Airbus A321neo at Düsseldorf’s airport together with Carsten Spohr, CEO of Deutsche Lufthansa AG.

The state-of-the-art successor to the Airbus A321, the A321neo, uses up to 20 percent less fuel, is much quieter and emits significantly less CO2 than the previous model. By the year 2025, forty A321neo-model aircraft will have been delivered to the Lufthansa Group. Overall, the company will be welcoming a new airplane every two weeks on average for the next ten years.

“The Lufthansa Group invests almost three billion euros per year into new, fuel-efficient aircraft. That is the most powerful tool we currently have to make flying as climate-friendly as possible,” says Carsten Spohr, adding that the prerequisite for these enormous investments is that Germany remains internationally competitive: “Policy-makers have to create a framework that allows investments into the future and strengthens the country’s position as an air traffic location.”

The “Aachen” will be a flying ambassador for the city and its federal state. North Rhine-Westphalia, where the group employs around 5000 people, is an important location for Lufthansa. From the airports in Düsseldorf, Cologne/Bonn, Paderborn-Lippstadt and Münster/Osnabrück, the Lufthansa Group airlines connect the economic powerhouse of North Rhine-Westphalia with the whole world. Düsseldorf, with its densely populated and economically strong catchment area, is an important long-haul and short-haul airport for Lufthansa Group.

“This aircraft will carry the name “Aachen” to many cities throughout Europe. This will also make it an ambassador for the European idea embodied by Aachen and North Rhine-Westphalia,” said Minister-President Laschet. “At the same time, giving the aircraft the name ‘Aachen’ also pays tribute to a city that is above all the distinguished home of RWTH Aachen University and many research institutions and companies with innovative drive and a pioneering spirit in all areas of future-oriented mobility. As the state government, we also want to harness this pioneering spirit for the aviation sector and are therefore supporting the expansion of the airfield in Aachen-Merzbrück to a research airport where alternatives for low-noise flight can be tested along with the environmentally-friendly propulsion technologies of the future. Our aim is to make flying more sustainable with new technology, further strengthening the competitive position of the aviation sector in North Rhine-Westphalia.”