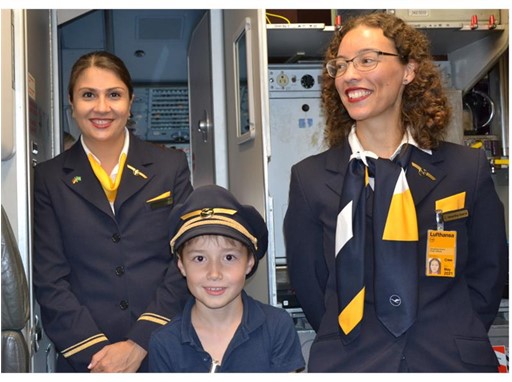 David Köhle, winner child of the television show "Klein gegen Groß", now redeemed his prize: A look behind the scenes at Lufthansa

No doubt about it: David Köhle is an aviation geek! He easily recognizes international airports by aerial photographs from above from Google Maps, he translates three-letter codes into airport names at lightning speed and on a journey on the apron he immediately recognizes every aircraft type and corrects charmingly present Lufthansa employees. However, David is surprisingly only nine years old. And when asked what he would like to become later, he says with conviction: "Pilot with Lufthansa! Sure, what else! At the end of February David thrilled the German TV audience when he recognized an incredible number of three-letter codes on the ARD show "Klein gegen Groß - Das unglaubliche Duell" as a children's candidate and thus clearly distanced himself from his "big" opponent Dieter Tappert alias Paul Panzer, comedian and pilot himself. David was able to translate an incredible 29 codes into airport names in just one minute. Panzer, on the other hand, only 17. Also not bad, but clearly worse than the young guy from Austria, whom his mother Susanne lovingly calls a "flight-fanatic toddler". Even presenter Kai Pflaume was astonished. As a reward for his great performance, David was rewarded with a day at Lufthansa, including a look behind the scenes and a flight in the cockpit. Now he has redeemed the prize and enjoyed the day to the full.

And this was his day: Arrival from Innsbruck to Frankfurt. Nothing special, because David has already flown about 15 times in his young years. Most recently to the USA. To Atlanta, onward flight to Miami, Florida. "It was great," says David. After arriving at the Lufthansa base and having a cool drink in the Crew Lounge in BG 2, the flight started. KA (Captain Candidate) Andreas Hobohm picked him up. Off to the briefing. First he got to know Captain Marc Kehnen. During the flight, he will look closely at what Andreas Hobohm is doing as a future flight captain. Very interesting for David. That's how it works! That's how you become captain. After reading the flight data from the computer (weather good, flight always heading north) the colleagues from the cabin were introduced. Purserette Saskia Bauerochse-Barbosa and her crew welcomed him with open arms, pure cordiality

But after the security check and the trip with the crew bus it became serious: Walkaround around the A320 "Papa Delta" waiting on the apron. Even an old aircraft, is everything in order before the flight? Andreas Hobohm showed David what was important. The boy had every detail described to him, asked a hundred questions. Andreas couldn't help but be amazed: "He knows more than I do!" Hobohm joked with a wink. In fact, David repeatedly surprised all those present with his sophisticated knowledge of airplanes. Impressive! But now quickly into the plane, the first bus with the passengers arrives. Quickly provide power in the cabin. David was allowed to press the decisive button in the cockpit. Go ahead, turn on the lights! Amazement!

After all the guests were on board, it all happened very quickly: doors closed, bridge gone, off to the runway. It's the pressure of the departure slot that counts. None of the participants will ever forget these big, amazed eyes when the Airbus took off with David in the cockpit. His first flight in the cockpit, he absorbed everything, every radio message, every movement of the pilots. Andreas Hobohm and Marc Kehnen explained every move with angelic patience. David was completely on the ball. After 1 hour and 50 minutes landing in ARN (correct David: Stockholm Arlanda). Friendly welcome by Uwe Teichmann, ARN SM. Head of the Lufthansa Group at the airport in Stockholm. He smuggled David briefly into the departure hall. "So that you touched Swedish ground, otherwise you weren't there after all!” Logically! And already it went back to Frankfurt. Full plane, good weather, darkness in Frankfurt. Landing: 21:25 o'clock. The colourful position lights and the apron lights were reflected in David's big brown eyes. He has never seen anything like it before. Incredibly beautiful! Unforgettable. As a farewell gift there was an Airbus model and a necklace made by the cabin crew. “That's how they do it at Lufthansa”, say the flight attendants. David likes to believe it. Once again, say goodbye to everyone, hugging everyone. "Thank you for a cool day," David said. Tears in the eyes. End of the performance? No, not for David! "Now I really want to become a pilot", he said completely exhausted. "And what was the best of all?" he is asked. David: "Everything!